Wearable tech has been all the rage for a little while now. Everyone is glued to their mobile phone so it seems perfectly reasonable to wear something on our body that makes that connection a bit more seamless. The NIKE Fuel Band was an attractive option but was primarily geared at folks who were interested in measuring their physical fitness rather than the number of likes on their latest Instagram photo. Alternatively, the Moto 360 Smart Watch is — quite frankly — very smartly designed and a great companion for an Android phone…but it is LARGE and in charge. For a woman with a slight wrist like myself, the 360 is simply ginormous.

While I'm a firm believer that companies don't need to make a "pink one" to appeal to women, I do believe that the wearables market is a bit more nuanced. This might sound vain, but I'm in the market to buy a wearable and would like to have something I'm likely to wear daily meaning that it is less likely to clash with my existing wardrobe. Since I am in the market for such a device, I started doing some research to see what exists besides the obvious wrist devices from Jawbone, Samsung, Nike and Motorola. I found that there are quite a few options but none seems to stand out as a clear definitive winner.

One such option is the high concept Opening Ceremony designed MICA cuff by Intel. The website for this product (and reviews I came across) are pretty light on what the technical specs are for this. It's described as a "beautiful bracelet first, a brilliant piece of wearable technology second." This seems to explain the lack of tech specifications as it appears technology is taking a back seat here (which begs the question: do you think women aren't interested in these details?!). As far as I can tell, it doesn't need to be tied to a wearer's mobile phone but then I have so many questions! How do you manage what it knows about you? What is the UI like for setting this up? Can I talk to it (to dictate messages, for example)? Will it talk to me (to feed me real-time directions while I'm walking or driving)? I assume we'll hear a little bit more about this when it actually hits real consumers who have pre-ordered the MICA for delivery in Q1 of 2015. Rebecca Minkoff has a similar offering coming as part of a collaboration with Case-Mate but, per the fashion industry trend, the focus of all communications thus far is on how great the device will look and not so much about how it will become essential to my life. An alternative to this is the MEMI (not sure why we're always yelling these product names!) which is closer to the MICA but definitely less feature rich. In the case of the MEMI, it is a bangle with the ability to vibrate and flash some lights. You then configure what these vibrations and flashing lights mean to you so they can serve as important alerts. Their website indicates that you sync it to your cellphone so you'll need to be within range of the device — er, actually, your iDevice as MEMI is only compatible with iPhone 4S and newer. There is definitely some value to having a way for important communications or notifications to "breakthrough" (as they put it) to your bracelet but it feels like it falls a little flat due to its lack of any sort of screen. It wins points for being discreet, but I don't see this working its way into my everyday life. I think a successful wearable should be something that I would feel naked if I left the house without. Ringly is another wearable, similar to MEMI, except instead of a bracelet, it is a ring that resembles costume jewelry. I kinda dig the one called Dive Bar (it's sooo pretty…) but at $195, it's a bit steep. The manufacturers of Ringly appear to have a nicely designed app by which you can customize your ring to vibrate and change colors for a variety of different notification events. Unlike MEMI, Ringly is compatible with both iOS and Android-based phones. Of course, Ringly is still consumption only it seems. It just pushes notifications to the ring and doesn't offer any means of responding to certain notifications (like calls or text messages, for example). This bothers me a lot about the women's wearables market as I'm noticing a trend. There's very little focus on helping increase productivity (can a girl get a text auto responder at least?). In the case of Ringly, their website indicates you can have a special alert to know when "he texted"; MEMI mentions you can get special alerts for when the babysitter calls — because the babysitter would be calling you, not your husband, because you know, normative gender roles and all that. I get that these are valid use cases for their devices, but they feel really limiting to me. Speaking of limiting, a more scary entrant to women's wearables is Cuff. Cuff's positioning is that women need to be notified, tracked and kept. While its app pushes notifications to your bauble of choice — you have the choice of a few different bracelets plus a necklace — the wearable itself has a "Life Alert" type button that, when activated, notifies people (your "In Case of Emergency" list, essentially) that you may be in an emergency situation. This, for me, is a little terrifying; first, this makes the idea of a butt dial so much less innocuous. Usually, when I receive an unintended phone call, I assume the person accidentally called me; with Cuff, I'd have to assume my friend is in dire need of help and with the help of Cuff's geolocation assistance, go find her. Second, I think this is basically saying that women need to have a safety device on their person at all times because you never know when you are going to be abducted. What a terrible thought! Doesn't everyone need a quick way of getting in touch with their ICE contacts (I'm surprised this isn't built into iOS…)? Why is this targeted at women? And, in a real emergency, would a woman think to use her cuff to call a friend? Would this help or hinder in a real emergency? You can decide — Cuff is available for pre-order and ships March 2015 for both iPhone and Android. 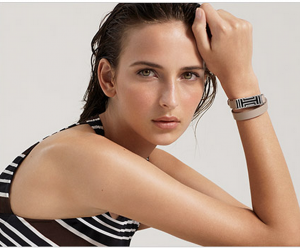 A more straightforward entrant to the wearables market from the fashion world is Tory Burch. Burch has actually partnered with Fitbit to essentially create "cases" for their Flex tracker product. Instead of the band typically associated with Fitbit products, Fitbit Flex users can insert their Flex into various Tory Burch wearable accessories. At current time, there are three different finish options for a cuff and three different finish options for a pendant. The pendant seems to be an elegant solution to counting your steps while also looking elegant for a business meeting, for example. However, as you can guess, this integration purely tracks your activity and, unlike some of the other examples noted, doesn't provide any degree of interaction or push notification.

So, while wearable technology has been flooding the market lately, it doesn't appear that there are any clear definitive winners — especially with many products officially coming to market in the first half of 2015. With the Apple Watch set to debut in Q2 of 2015, it will be interesting to see how that changes the market. Personally, I'm very curious to see how the Apple device will impact the market of wearables for women, specifically. Apple doesn't market its devices specifically to women but they've already indicated their watch will come in a smaller size that seems to respond to the fact that many existing wearable watches (like the Motorola watch) are just too large for some wrists. That said, I'm not fully sold on the Apple Watch based on what I've seen so far. But then again, I said the same thing about the iPad and now I happily tote one around on my travels.

If you've tried any of the devices I've noted, please feel free to let me know in the comments!